overall-design (EN) of the cooker

You can download the drawings
in DXF format for CNC here. 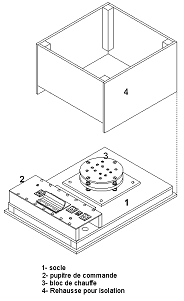 overview of the manually
operated cooker 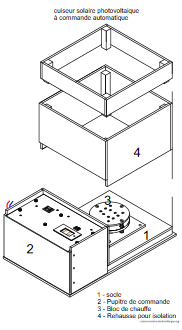 overview of the automatic
controlled cooker 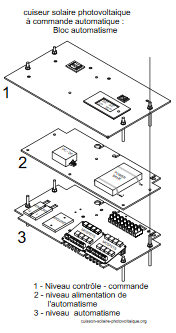 overview of the automation

The photovoltaic solar cooker offered here works without battery storage. The model shown here uses a single, ordinary 280 Watt solar panel; its performance is due in part to the fact that the hotplate and cooking vessel are fully insulated. Here are some examples of cooking 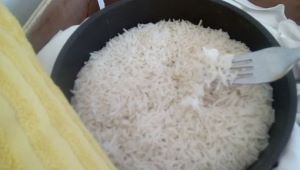 .
Benchmark performance of a litre of water at 20°C brought to the boil: 40 minutes under 920 W/m² of sunshine.

Some notable features of the cooker:

- A design with a view to self-construction, especially for the manually operated model, accessible to a careful amateur and therefore also to a craftsman or technician with a view to its commercialisation..
- The use of ceramic heating elements, whose flexibility of operation combines very well with the variations in the power supply provided by the solar panel.
- The insulation of the entire cooking device . The temperature is self-regulated to less than 200°C by the ceramics. It is therefore possible to completely insulate the firing unit. Heat losses, which are the plague of any thermal installation, are reduced to a minimum. In case of temporary cloudy passage the insulation maintains the acquired temperature level, the firing continues in "Norwegian kettle" mode.
- In the event of a significant variation in the solar flux, the number of ceramic heating elements in operation should be increased or decreased by either manual or automatic regulation.
The entire architecture of the cooker is based on the use of ceramic heating elements.

The automatic cooker is built to the same design as the manual cooker, but in addition to completely freeing up the driver, it has a dozen heating stages, thus ensuring more continuous monitoring of variations in the solar flux.
It is a small micro-controller - in this case an Arduino - that constantly adapts the ceramics and the energy production of the photovoltaic panel.
In addition to solar cooking, this device opens the door to a number of other applications, such as the production of domestic hot water for self-consumption or inter-seasonal storage, particularly in less sunny temperate zones.
Exit regulator, batteries and inverter, or sending electricity to the grid and then recovering it. Heat storage is one of the simplest forms of energy storage.
.

In the configuration proposed here, the cooker is intended for family cooking, in addition to or as a replacement for traditional energy sources: all water cooking, boiling, soups, braising, steaming and self-cooking, as well as food pre-cooking (plantin bananas...), excluding cooking in oil and frying, for sunny regions such as the Mediterranean region or more tropical regions. Due to the low power of the solar panel, the temperature rise of the cooking pot is slower than usual, but once the cooking temperature is reached, the actual cooking time is the same.

It is the drastic reduction in the price of solar panels that now makes possible what would have been unthinkable in the last century: the use of photovoltaic energy for thermal applications. 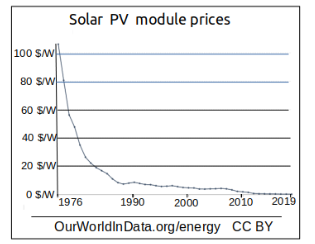 A solar panel such as the one used for the cooking processes described above is now available for 100 Euros, compared to the price of the fuel it will replace for more than 10 years - and, sunshine permitting, the panel can run all day long! As for the automatic system, apart from the possibility of self-construction or local construction by craftsmen or technicians (in computer clubs, teenagers do much more complicated things), its cost is derisory compared to the usual photovoltaic devices with regulator, battery and inverter.

In this heating device, instead of adapting the current to the resistors, the resistors are adapted to the available current. This device thus achieves an incompressible degree of simplicity, at least in the current state of the art.

Manual driving or automatic driving? There is no antagonism at all. In a region that often benefits from good weather (Mediterranean belt, dry tropical zones...), manual driving is sufficient: the driver sets his machine to one of the three or four available heating speeds, and can freely go about his business. On the control panel, a small Wattmeter - the equivalent of a sailor's compass - allows the driver to know immediately whether or not he has made a good choice by changing the heating speed of his cooker. When the sunlight is less stable, the automatically controlled cooker is better suited.
A wise solution: it is possible to start with the manual version, before possibly continuing with the automatic version by reusing the heating block, which is identical in both cases.

The icing on the cake: when the collector is not in use (which is a waste, but no more than with traditional energy), or when the sun is not shining brightly enough, there is a small "to other uses" option to charge mobile phones, or a tiny "external USB battery", or a "USB lantern, using a small DC-DC converter

Of course, there is nothing to prevent larger cooking installations from being considered, but the small team of photovoltaic.solar-cooking.org limits its role to developing and providing plans for a single solar panel of around 300 Watt and less than 40 Volt.

About the use of batteries :in an electro-solar cooking system, the battery is the most expensive component, the most delicate to manage, the most polluting, and the most dangerous. Eliminating the battery (provided that ceramic heating elements are used) makes it easier to access photovoltaic solar cooking, which has now reached an incompressible level of simplicity: a cooker associated with a collector. You may also consult the short document Solar cooking and batteries.